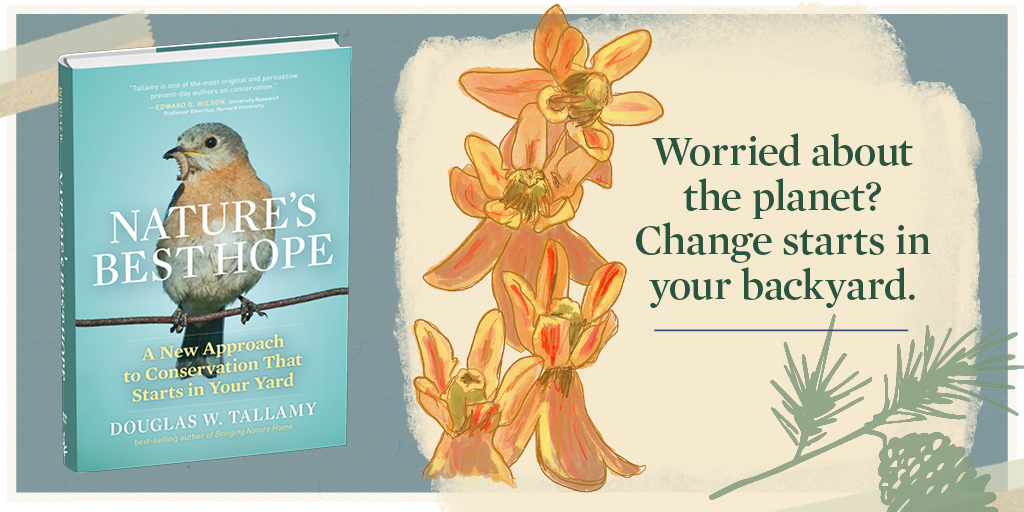 In Nature’s Best Hope (2020), Douglas Tallamy takes a major step beyond E.O. Wilson’s call for half the Earth to be set aside for nature. Tallamy, a professor of Entomology and Wildlife Ecology at the University of Delaware, argues that we need a substantial restoration of the natural environment in our own backyards. Only by launching a movement to persuade home and business owners to rip out their lawns and replace them with butterfly-and-caterpillar gardens do we have a hope of bringing back the birds and the insects—which, it turns out, are essential to our own survival.

Essentially, Tallamy argues that it is no longer possible to restore the planet using only traditional wildlife conservation measures, which involve setting aside large tracts of preserved land. We need to engage a majority of private property owners also, in urban and rural areas alike.

As he notes, 85% of all land east of the Missippi is privately owned. Where it’s not already paved over, much of it is in lawns on compacted soil, treated with pesticides and herbicides, and mowed with fossil-powered mowers. These lawns—sometimes called “green paving”—contribute nearly as much to stormwater runoff as the asphalt driveways and concrete sidewalks they’re usually adjacent to.

Arguably every bit as important as the climate crisis, the loss of biodiversity, in what is being called the Sixth Mass Extinction Event, is threatening keystone species in the web of life—including us. Just as Architect John Picard has said, “Our buildings are killing us,” we could also say “Our lawns are killing us.”

But we can and we must start to do something about it. Already, cities and states out West are starting to pay homeowners to remove their turf and replace it with perennials, rock gardens, and mulch, which require little or no artificial irrigation. And here in the Northeast, we should encourage homeowners and landowners to replace their lawns with rain gardens, native wildflower plantings, and edible gardens that infiltrate water and store carbon in the soil.

Here are some key videos. We’re planning to start implementing Tallamy’s vision at our new home in Rochester and we invite you to join us and keep in touch through our subscriber list. (See sidebar)

If you’re like us, you’ll recognize that this is a meaningful step that all of us who “own property” can take. We believe that a grassroots movement like this, which could spread rapidly across the U.S., could also be a precursor to wider systems change. By educating people about this possibility and the role it plays in the health of the biosphere, we can have people get closer to nature where they live (not just “someplace else” while we desecrate the places where we actually live).

This is one of the most important lessons! It needs to be shown to every student in every classroom in all grade levels from kindergarten to seniors in high school nationwide. Then to every arborist and landscaper across the country. I’m an arborist who owns a tree care company in southern New Jersey. I encourage the preservation of natives trees and shrubs constantly and have recommended his book hundreds of times to different clients. [Comment by David Parker]

Save native bees and other insects – Doug Tallamy tells us why, and how to do this in your own backyard, in a seminar presented by the City of Guelph and Pollination Guelph

Keystone plants are natives that are essential to our ecosystems because they support 90% of the caterpillar species that enable our terrestrial birds to reproduce, as well as all of our specialist native bee species. Join Garden for Wildlife™ collaborator, Entomologist Doug Tallamy, as he shares the importance of keystone plants and how they support healthy wildlife communities

Doug Tallamy: The Nature of Oaks: The Rich Ecology of Our Most Essential Native Trees

The ultimate vision is one of a thriving, prosperous, and flourishing planet where its humans belong to the Earth and contribute to its vitality rather than to its continued degradation.

Counting Down to Global Decarbonization

The IPCC has calculated how much CO2e we can emit and still have a 67% chance of staying under 1.5°C of warming—our allowable "carbon budget." We're on track to exceed that budget in the time shown.

In 2018, the Intergovernmental Panel on Climate Change published a Special Report outlining feasible greenhouse emissions pathways to limit global warming to 1.5ºC. In this report, IPCC researchers estimated that, beginning in 2018, humans could release an additional 420Gt of carbon into the atmosphere and still have a 67% chance of limiting warming to 1.5ºC.

The Climate Clock shows how long we have left until this carbon budget runs out, given the amount of carbon we continue to emit globally.

DEADLINE: Exceeding our Allowable Carbon Budget to Stay Under 1.5°C

We must take action to reduce global greenhouse gas emissions to zero as quickly as possible within this critical time window for action.